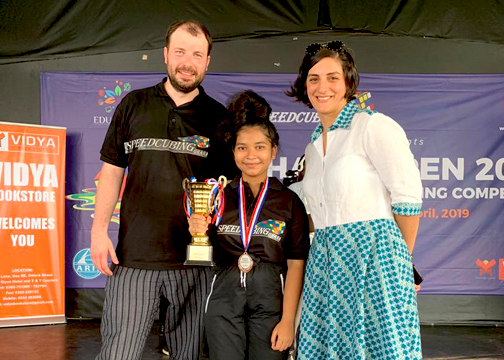 I joined a group of students who wanted to learn how to solve the cube. I
was surprised & happy to see familiar faces within this class. We started slow
and easy with the basics in the first level. I started with the 3X3 cube which
means there are 9 squares on each side with 54 squares in all. The next step
was to learn the mathematical formulas.

I mastered level 1 and quickly moved to level 2. Within a couple of weeks,
I could fully solve the 3x3 cube easily. After mastering the 3X3 cube, I
wanted to learn to solve other cubes as well. The types of cubes available
were Pyraminx, 2x2, Skewb and 3x3. They were all interesting, especially
the Skewb & Pyraminx given their unique shape. 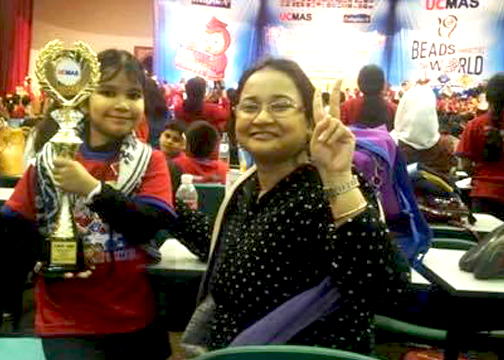 After learning how to solve each puzzle, I had to take time out to practice. I
took this responsibility seriously. Ghana's first ever speedcubing competition
was coming up and I wanted to do my best. Of course, I was nervous as well,
however, I was confident the months of hard work had prepared me for what
was to come.

During the registration, I found out that there were 65 competitors for the four
events of Pyraminx, 3x3, 2x2, Skewb. There would be three winners in each of
these events namely the first prize winner and two runner-ups. These competitors
were from 10 schools and 13 nationalities. Initially, tutorials were conducted by Mr
Philipe Viroleau, after which the competition started at around 9:30 am. The
competition was done in groups, starting with the 3x3 Rubik's cube. The way
the competition worked was, each competitor would have a judge (normally a
fellow participant) and the judge would inform the participant when to start.
The competitor would be timing themselves. The judge would sign off on the
score after each try and the average score of five tries was taken as the final
time score.

When it was time for me to compete, my heart was pounding. I was terrified.
The judge walked up and called my name. It was my turn. Was I ready for it?
Of course. Did I feel ready? I definitely hoped so! The first time I went on the
stage, I was tense and I fumbled a little while solving the cube. However, as
the competition continued, my confidence grew. 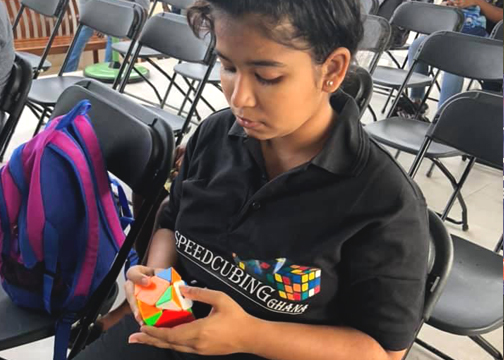 During the resting time, I was continuously practising and revising the
formulas. Fortunately, I did not have to wait too long to understand my
performance as the results and rankings were

being displayed online. That was the same rule which was followed for every
other cube. After the 2x2 round, my parents and I checked the website and
unbelievably I was a winner!! I was a runner-up in the 2x2 cube. I was overjoyed!
Next, the Pyraminx rounds were in the preliminary round I was ranked number
one with a time of 13 seconds and in the final round, I was delighted as I was
the winner among all contestants with an average time of 12 seconds. I had
secured the first rank!!! This time I was in the first place! It felt surreal. I had
exceeded my own expectations. The first rank in Pyraminx and a runner-up
in 2x2. WOW. Finally, after all the rounds were done, it was time for the prize
distribution. I was eager to go onstage and receive both my prizes. It felt like
my dreams had come true. My teacher who had helped me in clarifying all my
difficulties, Mrs Pooja was delighted with my success and heartily congratulated
me. The prize distribution started off with a speech from the guest of honour,
H.E Andras Szabo. He is the Hungarian Ambassador. He spoke about the Rubik's
cube being invented by a Hungarian and his delight to see the contestants solving
the cube in seconds. 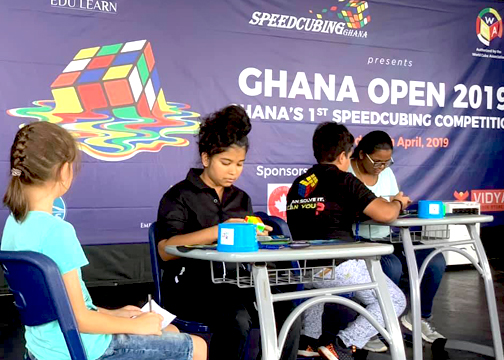 There were also speeches from Mr Philipe and Dr Fatma Odaymat, the director
of ARIS. After their speeches, I received two prizes, a trophy for the first rank
in Pyraminx and a medal for being a runner-up in 2x2. It was a proud moment
to see the happiness on my parents' face and the exhilaration I felt holding up
my trophy and medal. This is clear for my enclosed picture. I was interviewed
by a journalist and pictures and videos were taken by the media.

I felt unstoppable. I realize if I push myself I can exceed all expectations. My
achievement reminded me of the time I won the Abacus International Competition
in KL, Malaysia when I was adjudged the first place winner. I was just 8 years old
at that time.

The hard work and focused effort I put into my work have given me similar results. I have tried to personify our school's motto - "Learn, Lead, Connect" by applying my learnings, leading to these awards thereby helping me connect with the world of speedcubing. I hope my success will encourage more students from LCS to keep our school's flag soaring high. May the Lincoln Lions always ROAR!